Sorry for my absence but my partner nearly died a few weeks ago ...

Hi these past few weeks have been the worst I have ever faced in my life. My partner was admitted to hospital four weeks ago with a supposedly severe ear infection. Having been to see 4 different GP's, had an ambulance called and two visits to A&E.
He failed to improve. He was seen by ENT who syringed his ear and gave him antibiotics and he continued to stay in hospital. His is leg started moving involuntarily after 3 days of being in hospital and they told him it was anxious leg despite the fact we kept telling them he wasn't worried.
They were trying to get him up to walk so that they could send him home but we later found out that he was showing signs of epilepsy and stroke. I was quite angry and upset.  The nurse looking after him said she wanted an MRI before he was discharged (Praise God for her). This was on the Tuesday. I took the kids up and they saw their Daddy in a lot of distress. He was in the MRI for a long while finally he came out. The doctor who had told me it was only anxious leg looked to be furiously trying to sort something out and it was then I knew the news  wasn't going to be good news.
I braced myself. His meal was coming and they said No food. I knew that moment that this was far worse than we could ever of expected.
She ushered the kids into the staff room with an auxillary nurse and told me and Jimmy the worst news. He had Mastioditus (Ear infection that instead of coming out the ear goes into the mastiod bone) that had subsequently caused a brain abcess and two collections of the bacteria in the brain as it had not been diagnosed correctly. The anxious leg was a sign of epilepsy.
That night he was in HDU Neurology in a bad way. They drained one abcess and next day he was transferred to another hospital to have a 4 and half hour opertaion on his ear which will have to be operated on again in 6 months. The thing that saved his life apart from lots of prayer is that we have antibiotics. The night he was transfered to ENT for the ear op he was hanging with us by a thread I was so scared.
I have left out lots of detail here but I wanted to give you an idea of what the past few weeks have been like for me.
I have hope he will recover 100% as he is doing mighty well on the antibiotics he will be in hopsital for at least four more weeks as the anti biotics are super strong
If you are still with me here is my card for the Delicious Doodles challenge which this week has a great easy theme of Valentines day.
The card is completely digitally created except the colouring of the beautiful Delicious Doodles image which is called Cross and Roses. 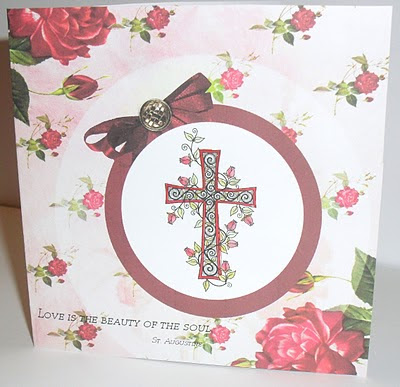 Thanks for stopping by today I really appreciate your time and comments. I hope you are inspired too. Hugs Pascale

My word you have been through it...i am not quite sure what to say, but wanted to let you know I am thinking about you, and hope he makes a full recovery!

Hi Pascale,
I am so sorry to hear of what you and your partner have gon ethrough in the last few weeks. You must have been so worried. I trust that things will now begin to improve and wil keep you both in my thoughts and prayers.
Your card is gorgeous.
Hugs,
Fiona x

Hi ya hun
my heart goes out to you all, what a very scarey thing, im so please he is on the mend, i hope he will make a full recovery hun, huge big hugs, sue,x

Sweetie I really am crying for you hun its just awful & to think they wanted to send him home we put our faith in these doctors!!! Thank goodness you stood firm hunni. I will pray & keep everything crossed for a speedy recovery. I'm here if you need me shug & if I can help I will. Please take care, I'm sending huge hugs love & thoughts to your whole family hun. May his guardian angel carry on sitting on his shoulder. Make sure you rest as well hun.

Sorry hun I've just realised I never commented on your card I was just more concerned for you & your family sorry shug.
Your card is truly beautiful I love crosses & this one is really truly gorgeous hun.

Sorry hun I've just realised I never commented on your card I was just more concerned for you & your family sorry shug.
Your card is truly beautiful I love crosses & this one is really truly gorgeous hun.

MAN, what a torrid time you've been having! Thank God indeed for that nurse - what WERE the quacks thinking. . .!!!???? To have a nurse get an MRI ordered and not them, hmmmn. Neglect case coming up me thinks. . .
Loving the card hun - honestly wasn't expecting you do be doing any crafting for a while yet. You take it easy Missus!!!
Love and hugs to all,
Teri xx

Lovely to see you blog Pascale!!! The card is just lovely and such beautiful colours!

Hope you are all ok and Jimmy is recovering well!!!

Lots of love and best wishes to you and all your family.I will say a little prayer for you all.

I am so glad to hear that your partner is on his way to getting healthy again!
I admire your strength and how you are holding up despite being scared!

All the best wishes to you, you partner and the entire family!

OMG Pascale what an horrendous time you've been having. I hope and pray your partner makes a full recovery and that the doctors at the hospital have learnt an important lesson not to dismiss everything as a simple infection. My partner collapsed on me a couple of weeks ago severely cutting his face open and the medical staff at A&E have tried to pass it off as a simple fainting episode - you don't stare with your eyes open and go rigid for 10 to 15 seconds and are unaware of anything around you in a simple fainting - we've an hospital appointment on Monday where we hope to get some 'better' answers as to why this has happened. I feel it was some kind of seizure but we will have to wait and see.

oh my word sweet friend!!!
hugs & my thoughts are with you all!!!

Wow what a rough couple of weeks!!! Sending lots of Prayers and hugs your way!!!!

Awww what a nightmare for you all Pascale! I hope your partner makes a good recovery and is soon back home with you. I'll be thinking of you
hugs
Claire xx

I really hope the worst is over for you now Pascale and that Jimmy's recovery continues to go full speed ahead. I know you and kids can't wait to have him home again! Love your beautiful card - such a lovely cross! Take care and make sure you look after yourself too!
Huge hugs to you all and lots of prayers coming your way,
Danielle xo

Hey Hun - wow = we all knew you were having a tough time, but that is just crazy! Hope you and the kids are coping too!
Big Hugs and hope everything goes smoothly from here on in!

Oh Pascale what an awful time for you both x Wishing Jimmy a speedy recovery. Your card is lovely - Im amazed you have felt like doing a card at all x Hugs pal x Janet

Hey Hun good to see you posting. So sorry that you've had such carp treatment at the hands of the NHS, just so relieved for you that things are finally heading in the right direction. I'll keep you and your family in my prayers and thoughts.

Your card is beautiful and I'm amazed that you've managed to be so creative with everything that has been going on.

Goodness Pascale what an awful time of it you have all had. I pray that he makes a speedy recovery for you all and that you can be together as a family again soon. I cannot imagine what you and the children must have been feeling, so sorry the doctors did not do their jobs properly! Big hugs to you and your family, I so hope you will be able to give us good news soon, Hugs Rebekah xx

My goodness, you all have been having a rough time of it! I will keep you all in my thoughts and prayers. Sounds like your honey is heading in a positive direction now.

Hi Pascale what a nightmare you have been through, fingers crossed that your partners on the mend. I hope you are feeling a bit better now he's getting better it must have been so stressful.
Take care i am thinking of you all
Hugs Angie x

Big hugs to you and your family Pascale. I hope your partners is home with you all soon. :-) xx

Love to you and all your family!!! Hope you have your partner home with you very soon.
Hugs Caroline x

oh my goodness ,, I am so sorry you've all been through such a terrible experience ! thank goodness he is on the mend now and I wish him a speedy recovery xx

So sorry to read this Joey...
Sending lots of love to you all..
You are in my thoughts!
I wish your hubbie a speedy recovery :) x

oh my! Im so sorry. i will pray and keep praying that everything will bee fine and that you really soon can enjoy and embrace life. BIG hugs to you!

Be a part of

Please feel free to take inspiration from my work. I am a true believer in sharing craft knowledge. Please do not snag my work for competitions or for submissions to magazines or any other purpose. I really appreciate this. Thank you.

So Proud to Be a

Have you been to these brilliant 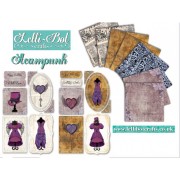 Get your Delicious Doodles here! 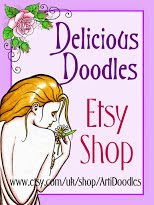